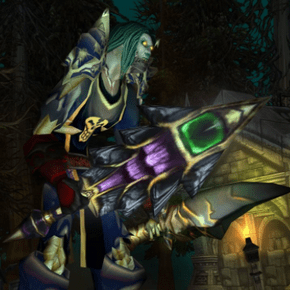 Christopher “KalimisT” Ioannou was one of the most exposed rogue of his time. Member of Team Dignitas alongside Hydra and Flyn as one of the most exciting RMP in the competition, KalimisT is a respected legend that will remain in the old gamer memory forever.

When our road crossed on Discord, during the Endless’ 3v3 tournament, I immediately jumped on the opportunity to organize an interview for Silent Shadows, and here we are.

Big thanks to him for sharing his time with us!

Welcome KaliMist, and thanks for accepting my invitation. Before we start, could you please introduce yourself for our audience – even though I’m sure most know you already: What’s your name? How old are you? Where do you come from? During which period did you play the game?

My name is Chris, I am 30 years old and I am from England with a Greek Cypriot heritage.
I played the game since release of vanilla as a rogue up until the end of Cataclysm. I did try the new expansions but did not play for very long in them.

First question that pops to my mind is the following:
Where have you been all this time outside WoW? If you have quit WoW, why is that?

I have been busy IRL and gaming casually.
I just found the class I used to love playing too different to previous expansions after Cataclysm and lost motivation to play competitive anymore. The addition of dampening the MS nerf on classes and the threat of interrupts being weakened were some of the many changes that made me quit.

We can see that you’re online on a few Discord Servers like Ryan’s one (Hydra).
Does this mean you still play from time to time on the game’s most recent version?

I tried to get into it but it was not fun anymore.

If we look at your record (sk-gaming.com), you have won a few competitions and several podiums. Is there something in particular you remember fondly today of those past experiences and achievements?

I just remember being thrilled to be able to compete in a game I loved and our team loved playing together and improving. Winning tournaments was an unbelievable feeling and chilling with the pros was great fun too.

In a previous interview, Neil Mosunic (Neilyo) explained that he was regarding WoW only as an e-esport. He was really expecting to build a career as a professional gamer around this game and most of the fun memories he has are related mostly to competition.
Do you find his statement somewhat relatable? Or by contrast would you say that you were less focused on the competitive side of the game and played it more in order to have fun?

I would not say I was less focused on the competitive side of the game, it just came with trying to achieve rank one on the ladder or in a tourney. I have always been a competitive person as I played sports quite a lot as a kid and teenager. Competing in WoW was something I really had fun doing, especially with some of the players, I used to play with who were on top of their game.
I feel like Activision Blizzard did not try hard enough to make WoW an e-sport eventually it was dropped by MLG and eventually ESL. The game deteriorated in PVP especially when they broke PVP so hard they added dampening.

Back in 2009-2010 you were pretty young I think (how old were you ?)? How did your parents react when they saw you going to world championship for a video game and even earning money by doing so? Were they understanding or would you say they struggled to grasp what was going on?

I just remember being pressured by my parents when I was 16 or 17 to stop playing so much but I assured them that it was right at the point where I would be able to make something of the time invested in WoW. They gave me a chance and I managed to prove it to them, so they became cool with it and used to cheer me on from home when I used to compete.

Thanks for replying to all these questions, now I’d like to dive a little deeper into in-game things and Classic TBC speculation:

What was your favorite WoW expansion? Why?

Have you ever played on a private server?
If yes, can you give us details? When & how long? Which expansion?

Only ever played on a vanilla wow server for a few months.

How did you react when Blizzard announced Classic servers? Did you give a Classic a shot?

I was very excited when Classic got announced, and yes I am still playing Classic as I don’t find retail as interesting.

Oh, okay, and what about Shadowlands that just got released a week ago?

I’m going to try Shadowlands yeah. But I know I’m going to be disappointed. (laugh)
…But, since arena will be fresh, I may as well give it a go.

…So what about Classic TBC?
As you know, Blizzard did a survey, did you respond? Do you plan to try Classic TBC if and when it comes out?
If so, why? What makes you want to play again?

I cannot wait for TBC to come out since it has arenas it should be even more interesting than Classic.

Great news! Can we expect the comeback of the great Hydra-Kali Disc/Rogue combo?

That is nothing but HYPE for real!
Can you share some good memories of your time playing TBC with us?

I had quite a lot of good memories in TBC. I remember getting my first glad in S1 as Warlock/Rogue with a player named Renji! That was a lot of fun because the game was new and the skill gap between players was huge even at the gladiator level.

Can you talk to us about the Stormscale golden age? Do you have some memories to share? Like, do you remember that ZOMBIES and DOOM SQUAD rivalry? #nostalgia

I just remember trying to improve all the time to try and get to those players’ level. I remember looking up to people in them guilds and wished to be as good as them one day. I had loads of good memories playing with friends and qualifying for the tournament realm as warlock rogue.

What was your favorite arena team composition to play back in the time? (And why?)

RMP then RLS it was the compositions I found most enjoyable to play in TBC, euro comp* was fun too.

editor’s note: *euro comp was the name of a 5s team-composition (RMP+LD)

By any chance, do you have some hidden footages of you playing a rogue in any expansion?
If yes, would you share it with us?

I once had a hard drive of loads of footage but it corrupted I was really sad when that happened.

So sad.. I definitely know the fee because I once got the same experience …
I would like to finish this interview with something kind of inspiring for our readers.
Would you say that rogue is the best class to play in this game? At least for TBC or event WotLK?
If yes, can you share your personal preferences about the class and why you fell in love with it?

I chose rogue since vanilla and just stuck to it since. I never really chose rogue because it was the best class in any expansion. I found the kidney shot not sharing DR with other stuns being one of the main reasons rogue synergised so well with other classes.

Yeah, I definitely agree with that.
Last question: what advice would you give to your younger self wishing to become excellent as a rogue??

Find people who you enjoy playing with and research what other players are doing to improve yourself.

Words!
I would like to conclude this interview by thanking you for offering your time, insight and memories with us, KaliMist, it was extremely cool to have you on Silent Shadows.

This website uses cookies to improve your experience while you navigate through the website. Out of these, the cookies that are categorized as necessary are stored on your browser as they are essential for the working of basic functionalities of the website. We also use third-party cookies that help us analyze and understand how you use this website. These cookies will be stored in your browser only with your consent. You also have the option to opt-out of these cookies. But opting out of some of these cookies may affect your browsing experience.
Necessary Always Enabled

Any cookies that may not be particularly necessary for the website to function and is used specifically to collect user personal data via analytics, ads, other embedded contents are termed as non-necessary cookies. It is mandatory to procure user consent prior to running these cookies on your website.