After hitting lvl70 and in between reputation grinding, gold farming and raiding, you might have considered stepping into the arena..
But where to start? How to choose your team composition? Is any combo easier than another? More comprehensive and intuitive?
Read on to discover, or re-discover some of the 2v2 arena combinations for WoW Classic TBC rogue.

Somewhat contrary to your future in PvE as a rogue, in PvP your class becomes an absolute must-have for many 3v3 combinations and extremely appreciated in 2v2. You are playing what is probably the best class for TBC PvP, making you a versatile arena partner.

Rogues pair well with most classes for the 2v2 bracket: priests as discipline or shadow, restoration druids, frost mages, Siphon Life/Soul Link warlocks, and many more. Rogues have been seen playing even with a warrior or a retribution paladin and managing to go over 2000 rating. Yes, the options are extremely varied and you may drift around quite a bit before picking the correct class to play with, as different combinations require different strategies.

Contrary to a healer limited to partnering with a DPS, the rogue can choose between a Healer partner or another DPS. Technically, playing healer/DPS and double DPS differs a lot in many situations (if not most) and before choosing you must determine your preferences in terms of arena experience.

Once you’ve thought of these questions you’ll be able to define part of your PvP orientation. Let’s sum it up in a short table:

Warning : If you’re reading on mobile phone, please turn your screen to read the table

Obviously, there are some healers that can play very aggressively and become a second DPS; but the more you climb, the riskier this is (as well as rarer).

The best combo to start arena as a rogue

The best combo is a matter of taste, in terms of game experience. Before looking for a teammate, you must define what you are looking for: Performance? Security? Fun? Intensity? Entertainment?

We made a poll and asked the community (on reddit) to give their opinion. The question was: Which team composition would you recommend to a ROGUE that wants to start 2v2 on Classic TBC?
There were 7 options :

Here are the results (600+ votes – to date). They represent reality in terms of the top 4, though I personally would change the order. 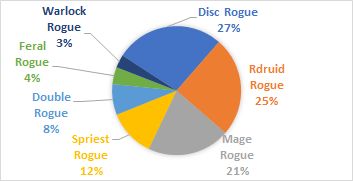 I reserved the poll’s first 150 votes to the current active TBC community and the results were:

After that, I opened the poll to the Classic WoW population interested in TBC Topics (TBC subreddits, dedicated TBC channels on discord servers etc.) and we observed multiple unexpected changes in the voting pattern, such as a preference for double DPS:

This poll confirms the need to offer as many inputs as possible to help you guys to make your choice.

With all the factors detailed in the table that compares Healer/DPS and Double DPS, it would appear that starting 2v2 as Healer/DPS to learn arenas is the way to go, as there is more margin for error and the learning curve is less steep.. Perhaps unsurprisingly, the best combos to pick as Healer/DPS are:

They’re pretty difficult to oppose because they both have a lot of strengths and low downsides, so here’s another table to see what they can offer.
NB: We did not offer more Healer options in the poll because they are not relevant to debutants and anyhow make suboptimal combinations, i.e Rsham/Rogue and Hpala/Rogue

Both classes are solid partners because they’re the expansion’s greatest healers, reliable DPS and CC assist and competent duelists. From a DPS assist perspective, Discipline Priest is a bit better because of a larger toolkit (Reflective Shield is an extremely powerful passive way to deal damage, Holy Nova does damage to opponents while healing self and allies. Most significantly, a priest is able to alternate between Holy and Shadow schools to do damage). The downside is that the Discipline Priest runs easier into mana issues compared to a Resto Druid.

They both offer a lot of CC, but Priest has kind of a safer rotation – it’s easier to Sap after 10sec of Fear than after 6sec of Cyclone. Also, Disc priest and Rogue are not sharing Diminishining returns on TBC contrary to WotLK. The pressure management is in favor of Druid that can Abolish Poison. Removing a healing reduction debuff is powerful considering that Rogues are likely the most popular DPS to face in arenas on TBC. The same applies to Crippling Poison. Druids can use a Travel Form to escape and eventually re-stealth and can rely on NS+Healing Touch to deliver a big heal right on time. Also, the power of HoTs allows being controlled while keeping good healing. Last but not least, the Druid’s buffs are a bit more useful for rogue’s damage while Priest’s buffs are more oriented towards survivability (Stamina/Shadow protection).

Undoubtedly, both have their strengths. If I was asked to give my opinion about these two compositions, I would probably recommend Disc/Rogue for a beginner because the general CC and DPS assistance is slightly better and the magic dispels allow removing important CC and debuffs (DoTs, Fear, Novas, Faerie Fires) bringing a lot of survivability to the rogue which can preserve its cooldowns. The combination is more documented on YouTube, so you can easily find examples to learn. Ultimately, it’s a matter of preference.

The popularity of double DPS

Rogue is probably the only class that can pair with every other DPS. With good experience and game knowledge, you can literally play with any other class and make it work at some point, with a few exceptions of course. Frost Mage, POM Mage, SL-SL Lock, Destro Lock, Shadow priest, Feral Druid, Retribution Paladin, Arms Warrior, Hunter, as well as another Rogue! Obviously, all these team compositions can be classified in four categories depending on their viability/difficulty:

This classification could be discussed as we have practised a lot for the past decade on many TBC private servers and witnessed different evolutions of the WoW TBC meta, but I am pretty sure that this classification would be the same ten years ago, if not with SPR and RL reversed.

That being said, here are the most popular options to pick (from experience, but also in agreement with our poll’s results)

There is a lot to say because opinions may differ a lot from one TBC veteran to another. We’ll do another table to examine both classes comparatively.

Different conclusions could be drawn from these class profiles, I guess, but the choice remains quite hard because Mage and Priest have their own strengths and weaknesses.

I played SPR as Shadow Priest for 3 years before playing rogue myself (I played most of the double DPS combs) and I would say that RM is a bit harder to master compared to SPR.
What I can share from experience is that starting arenas by playing double DPS team compositions requires a bit more experience with the game because you’ve got less time to analyze a situation when playing. It relies a lot on the rogue’s CC management (oftentimes controlling two targets) which requires both good vision, proactivity and reactiveness to work efficiently. Your caster, whatever the class, needs a rogue that knows what to do and when to do it. Your decision making has to be fast and clear.

– As Rogue/Mage, if you’re quite new to TBC Rogue , one would say that you could focus on doing your CC correctly and let the DPS part to your Mage. That’s a common statement that can be read everywhere and this could be true for some of the new Rogues here (lucky you). To be honest, I do not share this view for the new TBC rogues.
It would mean you’re playing with a perfect Mage that masters this comp which is quite unlikely to find if you are new to the game.
It also means that if you’re both (Mage and Rogue) debutant on TBC, playing RM may feel like a disaster… You’ve been warned.

– On the other hand, playing SPR relies a lot more on you, the rogue. You must equally handle the damage part and the CC part.
From a rogue perspective, Shadow Priest/Rogue is more debutant-friendly for few reasons :
You have a shield and some dispels on top of that. It gives you more options for your cooldowns (such as Vanish and Cloak). You can tank Kidney Shots if you’re protected by a shield, thus making you more resilient.
You benefit from off-healing along with your partner’s damage, making you a bit more threatening.
The tactics are less complicated to learn and to set up.

As Rogue/Mage, you have to adapt a lot to the opponent’s playstyle and your mage can really set up a switch of kill target just by doing a Sheep on the initial target. But you have to be aware that RM relies a lot on the synergy between the Rogue and the Mage. (Like every comp on high rates, yes…)

Finally, both comps have quite scripted tactics in arenas, but due to DoT, SPR is a bit more simple because there are a lot less windows for reversing CC to kill the other target and because DoTs cannot be kited. Once you start on an opponent, you’ll spend the whole duration of the game trying to kill that one. The higher you climb, DoTs tend to become a problem for exactly this reason and you may prefer playing RM so you can modify your tactics on the fly.

To conclude, keep in mind that playing with a healer brings more permissive gameplay in terms of mistakes because of better survivability. On the other hand, playing with another DPS will bring more sensations.

I wouldn’t recommend playing double DPS to begin in arenas as a Rogue, but it really depends on your experience with the game. If you have played it for a long time, your knowledge may suffice to properly start with the team composition that you prefer. If you have never touched TBC nor rogue before, starting with a Healer/DPS comb will probably yield better results. In both cases, the only way to properly learn and improve is through practice, so do not be afraid of trying things and waking the Silent Shadows that slept in you all this time.

I hope you found this article both informative and useful, it was certainly a pleasure to write it and if you want to react to it, please join our Discord server!

This website uses cookies to improve your experience while you navigate through the website. Out of these, the cookies that are categorized as necessary are stored on your browser as they are essential for the working of basic functionalities of the website. We also use third-party cookies that help us analyze and understand how you use this website. These cookies will be stored in your browser only with your consent. You also have the option to opt-out of these cookies. But opting out of some of these cookies may affect your browsing experience.
Necessary Always Enabled

Any cookies that may not be particularly necessary for the website to function and is used specifically to collect user personal data via analytics, ads, other embedded contents are termed as non-necessary cookies. It is mandatory to procure user consent prior to running these cookies on your website.