Combat rogue remains as one of the sickest TBC Rogue specializations cherished by many retail veterans that played TBC back in the days. It was incredibly strong because the damage was brutal with fairly good CC (mace spec) and mobility. A lot of movies released before February 2008 were showcasing HArP rogue team compositions, especially double DPS like ShadowPriest/Rogue or Soul Link Warlock/Rogue, looking super solid.

Why is it called HArP?

This specialization is based on the powerful ability named Adrenaline Rush learnt at level 40 which doubles your energy regeneration for 15seconds. In other words, it is more or less like having 200 energy when the buff is activated. Yes, call it god mode. This ability made combat rogue extremely popular back in the days of retail TBC because, combined with preparation, a rogue was able to have two significant burst phases. Imagine forcing trinket with the pressure of this cooldown and then being able to blind and restart with another Adrenaline Rush to kill the opponent.

But something TERRIBLE happened one day when patch 2.3.2 arrived, pushing rogue players to pick the shadowstep build instead of HArP.
“Preparation no longer reset the cooldown of Adrenaline Rush.”

Considered as one of the most significant changes in rogue history during the pre-WotLK era, this major update also buffed the Shadowstep specialization (as this ability was now reset by preparation) and is arguably responsible for the Combat PvP spec’s extinction on Classic TBC. Rip HArP, as Neilyo said in his 11th movie.

The PvP combat specialization mostly relies on one spec on the Burning Crusade, but depending on your playstyle, the spec can be customized quite easily. However, you got to pick multiple must-have talents for a good combat build:

If you’re a Shadowstep player, you will likely figure that the combat spec suffers a lot from energy and combo generation. The absence of Ruthlessness and Relentless Strikes talents (in Assassination Tree, from the Subtlety spec) affects the playstyle a lot because it forces the rogue to be smarter in terms of energy pooling and management. Sadly, this is not the only downside of this specialization.
The mobility provided by Shadowstep also significantly impacts rogue’s efficiency in arenas (shadowstep-kicks, shadowstep-kidney shots against other rogues, shadowstep-saps…) and this is a reason why combat specialization requires a bit of practice to be mastered. Don’t worry, another tool replaces the shadowstep in the HArP build: the improved sprint. (more details further in this guide)

Let’s check the build below to get into the famous HArP template. 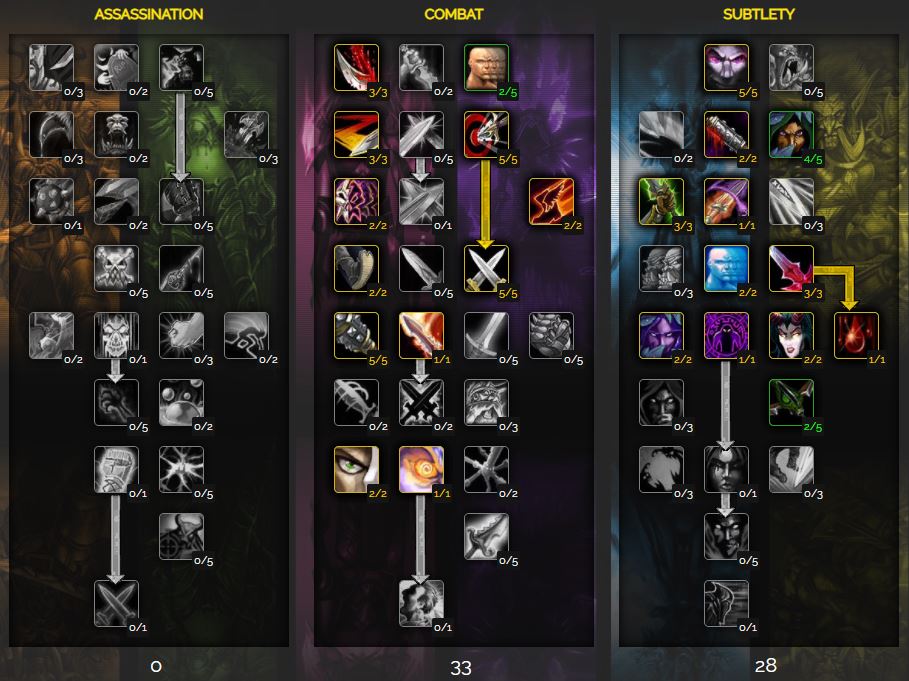 We previously mentioned the multiple downsides of the HArP specialization, but this build also offers many great improvements to a rogue’s key abilities: 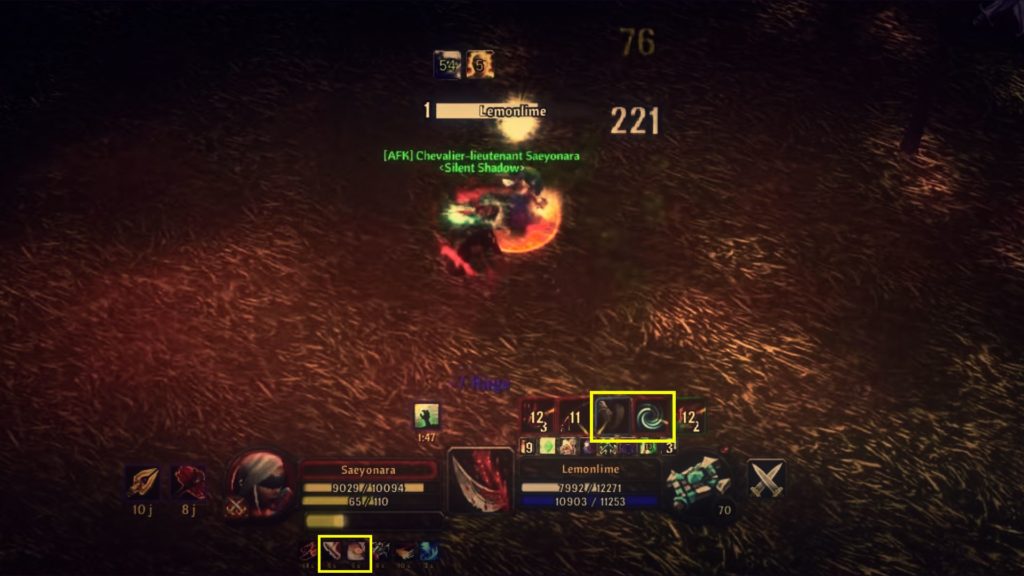 Playing HArP is extremely cool in battlegrounds. Most of the players are not prepared for it because subtlety (hemo/shadowstep) is usually the way to go on TBC. So you can take advantage of your cooldowns and surprise your opponents with the combat tree special abilities previously detailed in this guide.
If you want to spice up your combat tree, one of the most unpredictable abilities to use as a rogue is Riposte. The condition to unlock this ability is to invest 5 points in the Deflection talent, increasing your Parry chance by 5%.

Riposte is a strike that becomes active after parrying an opponent’s attack. This attack deals 150% weapon damage and disarms the target for 6 sec.

The question is: are you parrying enough to make it worth using?
Well, from experience, I am personally not fond of it because I don’t think that much should be banked on that 5%; I don’t find it as much cost-effective.
The second reason is that picking this talent requires 6 points (5 for Deflection +1 for Riposte itself) and this means that you’re likely going to miss important talents in your tree, such as Improved Kick or Dual Wield Specialization, for something that you might not be able to use when you really need it…
Besides these downsides, disarming a warrior or a hunter (so he cannot use Wing Clip) is extremely pleasing, but it is definitely a battleground thing.

The second customization that you can bring to your HArP build is the weapon specialization. It is highly recommended to play with maces to take advantage of the stun procs that come with this specialization, which are quite painful for your opponents to deal with. However, sword specialization also offers a 5% chance to have an extra attack on your target…on each hit.
That is a matter of taste, but I always preferred a bit of control rather than more damage, hence I opt for the mace spec as do most of the HArP rogue players.

Nerves of Steel gives +5% chance to resist Stuns and Fear effects (up to 10% – 2 points).
As an orc player (with Hardiness), this would really become a funny thing to play with if you stack it up with a 24AP +5% stun resist meta gem (though quite difficult to obtain this). Make sure to read our guide to pick the best race for rogue on Classic TBC.

In early TBC, you can try to get the Blackout Truncheon mace which is a level 68 rare item dropped by Grandmaster Vorpil in the Shadow Labyrinth.

Then, your BiS mace to use as a HArP player will be the famous Rod of the Sun King because it grants your rogue some chance on melee attack to gain 10 Energy, which is extremely needed. But if you want to play with this weapon, you will have to invest some time in PvE as this weapon is dropped by Kael’thas, final boss in the Eye / Tempest Keep (T5 raid).

Playing HArP doesn’t offer that many options when it comes to arena team compositions.
For today’s meta1, the most optimized combination would be pairing with a shadow priest, combining mace stuns with their Blackout procs and Improved Kicks with Silence. Preparation on top of that makes it interesting on paper and offers dispels (which could compensate for the lack of Shadowstep) as well as a shield. You can also try it with a warlock: you miss out on Blackouts and HoT healing (from vampiric embrace), but you gain healthstones, Paranoia, and better crowd control  with repeatable Fears.

One could argue that double rogue (HArP + Shadowstep) would also produce some exciting situations but to be honest, HArP spec is not viable anymore in arenas since the 2.3.2 patch and the lack of mobility would be really painful to deal with.

The spec literally died after the patch we mentioned above, and there is no post-nerf documentation around this spec. Most of the rogues wanting to experience an alternative to Shadowstep will likely pick the Mutilate specialization instead.

1 today’s meta, meaning 2020+ TBC playstyle as opposed to S2 retail playstyle. The meta evolved partly because of the 2.3.2 patch, but also because we have now practiced TBC for more than a decade!

Let’s sum up everything stated before in a short table.

Specific rogue spells and how to use them

Slice and Dice is a very useful ability to a HArP player because you lack a lot of energy when you can’t use Adrenaline Rush.You must use this ability if you want to deal more damage, especially if you’re out of energy.
Note that you want to use your SnD when you’re sure that you will be able to stick to your target during its duration. Otherwise, this would be a waste of combo points.

The same applies to Adrenaline Rush. Make sure that you will be able to avoid any 10 seconds control (i.e, Fear, Sheep, Cheap Shot into Kidney Shot, Trap, Blind). If you use this ability, you need to ensure it’s used as efficiently as possible as it is your most important CD. Doing otherwise would probably put you in a bad situation.

The way to use the Sprint ability as HArP is significantly different than as a Shadowstep Rogue because it also removes all movement impairing effects. This means that you want to keep it for specific situations (i.e. roots and novas, mostly) to save another big cooldown (Cloak, Vanish, or Trinket). This ability becomes really strong when facing frost mage experts. In arenas however, you will almost never use your sprint as a way to get a fast Sap on your opponent.

Contrary to the shadowstep’s opener great diversity, the way to properly start a fight as Combat PVP rogue relies, most of the time, on Cheap Shot followed by Gouge during which you may spend an important cooldown such as Blade Flurry or Adrenaline Rush, or both, depending on the situation, and then Kidney Shot.
This is the reason why Gouge on Blink is also a popular move as HArP. It’s a great counter play when not playing with Shadowstep and the fact that it’s improved allows you to connect to the mage without using Cloak nor Sprint.
Further, HArP also allows you to engage with a Garrote followed by Expose Armor or Slice and Dice for example. It’s a matter of experience and preference, as well as of the situation.

On TBC rogues – whatever their specialization – have to swap around multiple off-hand weapons to apply different poisons depending on the opponents (Mind-numbing against a caster, Crippling to slow enemies, etc.) This need often leads to significant damage loss.
As HArP rogue, the fact that you’re playing with Dual Wield talent partially compensates for the damage loss through weapon swapping, if we consider damage done strictly and not about the number of hits which comes in very handy, compared to the Shadowstep specialization for example.

“I think Adrenaline Rush shouldn’t have been taken off Preparation and that they should have taken it one nerf at a time instead of one nerf and one murder of a spec. The Shadowstep buff is good so that it isn’t fully wasted on moving targets or ones with lag causing their movement to be delayed. With HArP dead if these specs go live hemo shadowstep will probably be the way to go, which should be fun to play,don’t get me wrong, but killing HArP hurt every rogue comb significantly.”

This website uses cookies to improve your experience while you navigate through the website. Out of these, the cookies that are categorized as necessary are stored on your browser as they are essential for the working of basic functionalities of the website. We also use third-party cookies that help us analyze and understand how you use this website. These cookies will be stored in your browser only with your consent. You also have the option to opt-out of these cookies. But opting out of some of these cookies may affect your browsing experience.
Necessary Always Enabled
Necessary cookies are absolutely essential for the website to function properly. This category only includes cookies that ensures basic functionalities and security features of the website. These cookies do not store any personal information.
Non-necessary
Any cookies that may not be particularly necessary for the website to function and is used specifically to collect user personal data via analytics, ads, other embedded contents are termed as non-necessary cookies. It is mandatory to procure user consent prior to running these cookies on your website.
SAVE & ACCEPT